We are thrilled to present another Spotlight Testimonial case. This post will focus on the story of Tamlyn, who had been suffering from chronic fatigue since a very young age. After a friend on Facebook recommended Family Practice Center, Tamlyn paid us a visit and first met with Dr. Tyler Wheeler. Below is Tamlyn’s firsthand account of how Dr. Tyler and the team at Family Practice Center were able to help her change her life for the better: 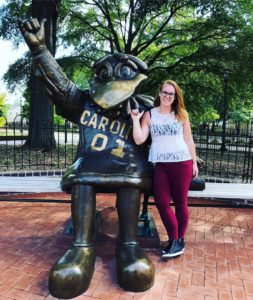 I first became a patient in January of 2018. I needed a physical and had some concerns about fatigue. At that time, I was a completely healthy 27-year old woman. Physically fit with what appeared to be some food sensitivities. Fast forward to October 2018. I had been prescribed some steroids by a local doctor at an urgent care for what I thought was a sinus infection. After completing my 5-day cycle, I started to notice some bruising. I figured nothing of it and kept going. After a few weeks, my boyfriend convinced me to make an appointment with Dr. Tyler. We ran labs but didn’t see any need for alarm at that point in time.

I was working at State Farm Arena at the time where we were preparing for our grand re-opening. I was working crazy hours, including a 23-hour shift for an upcoming concert, and wasn’t getting enough sleep. I received a voicemail on a Saturday morning stating that my lab work was off and should be re-tested the following Monday. I didn’t think too much of it but made sure to not do anything physically strenuous over the weekend.

When monday morning came, my mom drove me back to the office bright and early to get additional labs done. I went home, rested, taught my weekly Bodypump class and took the dog for a walk. Around 9pm my phone rang from a number I didn’t recognize. Normally I would not have answered but had a feeling I should. It was Dr. Tyler calling about my lab results; while he was on vacation.

He told me that I was in serious danger of internal bleeding and needed to get to a hospital immediately. He called Northside ER to inform them that I was coming. I did not fully understand the severity of the situation. Once at Northside they immediately took me back, pulled more blood and started a plasma infusion. A normal platelet range is between 141,000 – 400,000. Mine was 4,000 and dropping.

After 4 days in the hospital (as well as 3 more days the next week and another in December), I was officially diagnosed with Idiopathic thrombocytopenic purpura. This led to multiple rounds of transfusions, steroids, and eventually a splenectomy.

Not only do I believe that Dr. Tyler saved my life with his phone call that Monday night, he also kept in touch along the way. Asking me how I was doing and if I had any questions he could try to answer. Knowing I was in the care of a hematologist, he would still check in on me.

I recently saw him for my 2019 annual physical exam. We spent a long time talking about my condition, and how it has impacted my life. I am still under the care of a hematologist, and probably will be for the rest of my life, but I cannot thank Dr. Tyler for everything he has done for me. He is straightforward, compassionate, and really listens to what your concerns are.

What an incredible story. We’re so happy that Tamlyn was proactive about her health and reached out to us before experiencing any more serious health concerns. If you would like to contribute a testimonial of your own or visit with one of our healthcare providers, contact Family Practice Center to schedule an appointment today. Don’t forget to follow us on Facebook and Twitter for additional tips, patient testimonials, news, and more.

We are so excited to introduce our newest healthcare providers to Family Practice Center!

Appointments with Nisha and Brooke are currently available at our Atlanta location in Sandy Springs, so contact us to schedule your first appointment today!

We continue to grow! Keep an eye out for additional new locations in the months ahead including Buckhead and Smyrna!

Flu shots are available. Call and schedule your appointment now with one of our Family Practice Center providers!