What Should My Blood Pressure Target Be?

Published online in the AHA’s Hypertension journal, the new 2017 guideline covers detection, prevention, management and treatment of high blood pressure (HBP). Specifically, it calls for HBP to be treated with lifestyle changes and with medication as needed beginning at 130/80 mmHg rather than the previous commonly accepted threshold of 140/90 mmHg.

The authors said they anticipate the new guideline will primarily affect younger adults — with the prevalence of HBP expected to triple among men younger than 45 and to double among women younger than 45. Even so, they noted that there should only be a small increase in the number of U.S. adults who will require antihypertensive medication.  After reviewing the data, I plan to embrace the guideline with enthusiasm.  As far as I can tell, thoughtful, measured interventions the benefits far outweigh the risk.  Even in the frail elderly with bp >110/70 numerous studies (HYVET and SPRINT) have shown lower mortality when a bp < 120/80 is achieved.  More on this later.

According to the AHA, the new threshold will lead to 46 percent of the U.S. adult population being categorized as having hypertension. Using the previous threshold, that figure was 32 percent of American adults.  Similar to previous years, 30% of adults don’t know they have hypertension and about 40% are not at their goal.  In fact, an estimated 12.6% have BP> 160/100.

Is Hypertension with age a normal process?

Hypertension does increase with age.  According to many patients and doctors in the early 1970s, this was considered normal.  But it is certainly not healthy.  A study from Lancet 2002:360:1903 was highlighted in JNC-7. This study analyzed 61 prospective studies of one million Americans aged 40-89.  They found a two-fold difference in death from ischemic heart disease, stroke or other vascular reasons associated with changes in SBP of 20 mm Hg or DSB of 10 mm Hg.  (see chart).  One million Americans can’t be wrong, can they?  Updated data suggests that a normotensive 45-year-old will have an 85-95% chance of hypertension within 40 years. The risk of even small increases of BP in middle-age adults is impressive.  A study of the observational risk for Coronary Heart and Stroke events found that the relative risk compared to < 120/80 = 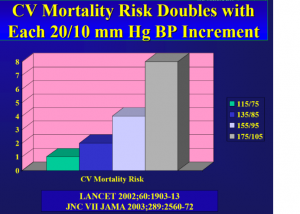 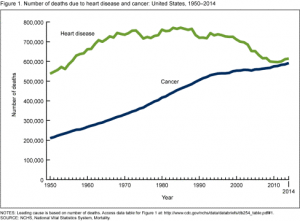 It is known that systolic pressure rises throughout life, and a steady tendency of diastolic pressure to rise in younger patients until 55 before this decline.  The reason for this is mechanical: the muscles of the blood vessel wall are comprised of 60% elastin (rubber band) and 40% collagen (rawhide) when younger but then this composition reverses in mid-life.  The stiffer blood vessel cannot effectively “hold or accommodate” the pressure and so it surges then plummets.  Also, there are changes in the RAS (renin-angiotensin-aldosterone system) leading to a steroid and adrenaline -like effect on blood pressure.

A minus or C plus?

Patients often argue with their physician about their blood pressure status and targeted goal.  There is indeed a whitecoat effect that makes a doctor office reading less valid than a home reading.  The new recommendations give 3 steps of intervention: detection, evaluation, and management.  Of these detection is the most challenging. Technical mistakes are common.  Whitecoat hypertension (high bp only at the Doctor’s) should be confirmed with home monitoring.    Big decisions should not be made based on a single inaccurate reading.

Although it is true that modifiable factors do affect hypertension control, there is no doubt that a hypertensive patient will remain hypertensive over time, and a borderline level patient will become hypertensive and BOTH will suffer some degree of injury compared to normotensive patients.  The most compelling reason to me for early intervention is the finding that incident hypertension in middle-aged individuals predicts cognitive decline.  Other benefits include preventing heart muscle stiffness or enlargement and the incremental increase in tissue injury throughout the body.  The controversy should not be whom to treat but how to treat them.  When I grade my patient’s progress, I will rely on their readings at regular settings, measured at least weekly, and over extended period of times.  I want to see them normal MOST of the time not SOME of the time.

In a 12-year prospective study (Kohler S et al, Hypertension 2014 Feb: 63:245), declines in executive function memory and processing speeds were greatest with uncontrolled hypertension (patient ages 25-84). In this study the declines were greatest with uncontrolled hypertension, but even the adequately treated patients had higher decline than those who started with no hypertension.   JNC8 proposes cognitive decline to be caused by endothelial dysfunction in the brain (small blood vessel lining defects).   Here are the likely 3 mechanisms of damage:

First, the disruption of the blood-brain barrier allows toxins and heavy metals access to the axons leading to either an acceleration of Alzheimer’s dementia or an earlier onset.

Secondly, white matter insulation is lost in the peri-ventricular portion of the brain.  This creates slower processing speeds and “disconnections” between different brain regions.  Though this is distinct and more limited in scope then the destruction of Alzheimer’s it does affect cognitive ability.

Thirdly, lacunar infarcts or mini-strokes can damage patches of brain tissue and lead to step-wise decline in brain function.  Unlike some other conditions early detection and management of hypertension does alter outcomes in quality and quantity of life.

Lifestyle and Diet or Medication?

The answer is BOTH.  The newer recommendations encourage patient participation for blood pressure management.  Patient’s will do better if they are aware of their condition and are more diligent at measuring their pressure.  Treatment plans should not be based on 2 office visits per year.  The following summarizes the value of various non-pharmacological therapies and their contribution of lowering pressure:             For Hypertensives             For Normotensives

These values are proven measures that have high quality evidence from Randomized Controlled Studies.

Exercise is the Best Medicine

Several large controlled studies have shown the benefits of diuretics, calcium channel blockers, angiotensin receptor blockers and ACE-inhibitors.  The first two have the most influence on strokes, and the latter two have more effects on heart failure and coronary disease prevention. No medicine can accomplish what exercise can do.  Through regular conditioning, muscle capillary beds recruit blood flow through an expansion of surface area 4-6 times that seen at rest.  Through practice, that translates into a lower peripheral vascular resistance and takes a load off the heart.  Maximal exertion is measured by metabolic equivalents (MET).  A MET of 1 is the oxygen consumption at rest ~5 liters/minute.  During maximal effort the heart doubles its pulse, increases its stroke volume by 50% and depends on the muscle capillaries and Coenzyme Q 10 to do the rest.   An ability to raise MET levels to from 5 to 8 will double your survival rate.  As MET rates go up the survival continues to improve.  It is also known that exercise releases endorphins, improves mental function and reduces stress. 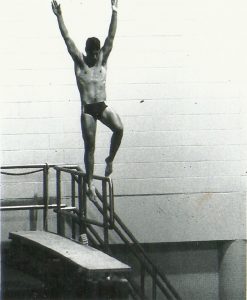 Not everyone will develop hypertension in their lifetime.  The lucky ones will not reach a threshold for treatment until their sixth or seventh decade of life.  But if you are not observant or vigilant, you will miss a huge opportunity to make a difference.  Lowering stress, eating healthy, and monitoring pressure should be a continuous process.  Accurate testing is the only way to prevent over-treating or undertreating the condition.  Medical illnesses, surgical stressors and life challenges are variables to be considered when formulating a plan.  Older patients who are institutionalized or with dementia should not be treated aggressively, since this group of patients has not been studied.

If blood pressure was not critical, it would not be a vital sign.  Be the best you can be!

We are so excited to introduce our newest healthcare providers to Family Practice Center!

Appointments with Nisha and Brooke are currently available at our Atlanta location in Sandy Springs, so contact us to schedule your first appointment today!

We continue to grow! Keep an eye out for additional new locations in the months ahead including Buckhead and Smyrna!

Flu shots are available. Call and schedule your appointment now with one of our Family Practice Center providers!